Life keeps on marching forward, doesn’t it?  I swear yesterday was just New Years, and here we are and it’s February!

We have had a lot of forced fun the past few weeks, so we certainly can’t complain.  We had to spend three days in Costa Rica to renew our Nicaraguan visas, and we took full advantage of it!  On top of getting to go as a family, a friend of Jenni’s flew into town to go with us and they spent the few days doing all sorts of crazy things Jenni never would have done on her own.

Repelling down a waterfall.  Not just any waterfall, but a 141 foot one.  For a girl that’s afraid of heights that was a pretty big accomplishment!  The girls had quite a few adventures and braved public transportation.

The boys and Mark spent the time at the beach and a pool, where Tate learned how to swim.  He’s been working on it for several months and he finally got to the point that we feel comfortable with him in the water.  We’re still working on back floats but his crawl stroke is awesome!

On the home front things are going well.  Kevin is still here with us and doing great!  He started classes and is studying often.  We hope to get him hooked up with a mechanic to do an internship in the next couple of months.  We’ve been really impressed with his helpfulness, his attitude and his comprehension of biblical stuff.  I know I have promised more on that later and I will come through, but for now here’s a pic of the welcome home banner he made for us: 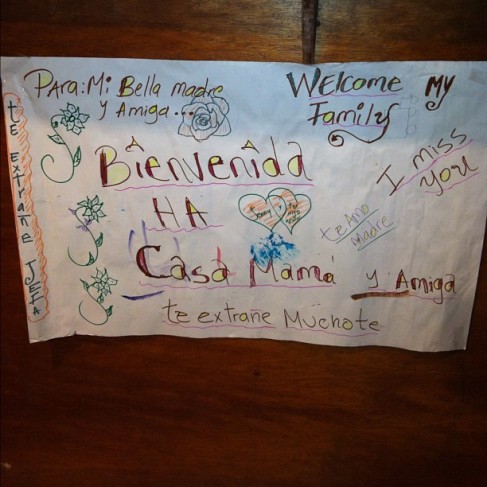 Theo starts school on Monday.  His attitude is lacking, but we’re working on that.  We’ll be officially kicking off our worldview study with the Posada and Casa Ester girls on Thursday.  We’re super excited about this and would appreciate your prayers.

Another update will come later, but for now, have a great week!

1 Response to A big update